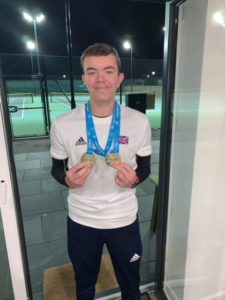 In 2018, Michael was ranked within the top 8 in GB, under the Tennis Foundation rankings system, having competed in the Nationals for that year, after being chosen to play in Division 1.

Following on from his continuous winning streak, Michael was selected to join the LTA’s GB Development Squad for the year of 2018, and at the end of the year was offered a promotion and invited to play under the Team GB National Performance Squad for 2019.

Michael’s tournament history is consistent of winning numerous medals, including golds at various tennis tournaments across the UK, with those mostly being at national events, and also competed in the 2017 National Summer Games (an Olympic affiliated tournament), aged just 15, and went on to win gold in the men’s singles as well as the mixed doubles.

Since joining the GB Squad, Michael has been working hard in the hope of being selected to represent his country at a host of upcoming international tournaments (those of which could be held at any given location across the globe.)

If selected for these tournaments, Michael will be actively competing for a world ranking.

Michael currently trains with the GB squad at the National Tennis Centre in London.

The DRF are immensely proud to support Michael this year.  He is passionate about his sport, and is aiming for great heights.