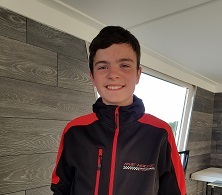 Lewis recently entered into the Evo Cup, even though he was told it was a much higher level than he currently was.  The organisers thought he would gain benefit from the  experience of following the more experienced drivers.   His mum, Michelle, said  “he totally surprised us all by coming 6th place out of 12 so he really did an amazing job!”

He also raced in the Jenson Cup but this one could have gone one of two ways and unfortunately it didn’t pay off for Lewis.  In this Cup competitors are all at exactly the same level, and Lewis was between second and fourth place the whole race,  which made it very exciting to watch but Lewis made an error when he saw a gap and thought he could make it through.  It was his final lap,  unfortunately, he clipped another boy’s kart as he overtook, causing the other kart to spin off  which was obviously Lewis’ fault.  Although the result showed he finished in third place he gained a big penalty which made him drop dramatically to eight place!  Michelle recounts “Lesson learnt the hard way.  Lewis was disappointed and angry with himself but we have told him it’s how you learn and not every race is going to be perfect. So he is putting that one down to experience and is still looking forward to the next race”.

The DRF are proud of Lewis not only for learning about sportsmanship but also the life skills he is developing along the way.